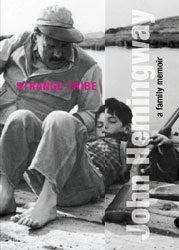 As both a student of the memoir genre and a sappily devoted Hemingway fan, I'm eager to read Strange Tribe, John Hemingway's forthcoming memoir about his life and family. (Pub date is May 1, but Amazon lists it as in stock.) This could be a great book or a perambulating cheese ball. Could go either way. I'm guardedly optimistic. All I know for sure is that I want to read it, but here's a bit of his PR copy:

...the peculiar family dynamics between Ernest Hemingway and his youngest son Gregory. Gregory, the author’s father, tried to live up to Ernest’s “macho” reputation throughout his life. But as a cross-dresser and (eventually) a transsexual, Gregory was obsessed with androgyny and his "female half,” and he struggled with personal demons up until his death in the Women's Correctional Facility of the Miami Dade County Jail in 2001...

This is also John's story--about what it was like growing up in Miami and Montana with his father and his schizophrenic mother, and...shows how the persona of Ernest Hemingway, the most important literary icon of the past 100 years, continues to loom darkly over the often-troubled lives of his descendants.