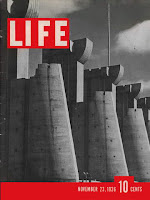 The cover of the very first issue of Life Magazine features a famous Margaret Bourke-White photo of the Fort Peck Dam. Inside the issue are more photos and a story about the people working on the dam. It's an important piece of American history. Unfortunately, Bourke-White got a lot of it wrong. I've known this all my life, because my grandfather worked on the dam, and I doubt there's anyone who knows more about its history than my mother, Lois Lonnquist, who as a little girl watched the dam rise up out of the hard Montana landscape.

Shortly after she retired from her editorial position at our hometown newspaper (the Helena, Montana Independent Record) Mom began working on a book about the real folks who built that amazing chunk of American history. I think at times, she felt like this book was almost as much work to build as a giant cement wall, but Fifty Cents an Hour: the Builders and Boomtowns of the Fort Peck Dam is finally out there.

Here's a bit from her web site:

One of the most fascinating chapters in Montana history is the building of the Fort Peck Dam across the Missouri River in northeastern Montana. The story of the people who built it, is another.

Project Number 30, the Fort Peck Dam, was authorized by President Franklin D. Roosevelt during the Great Depression of the 1930s, and built by the Army Corps of Engineers. It provided much needed jobs, and hope for thousands of unemployed Montana workers, and others across the country. It left a legacy of flood control, electric power, and recreation on the Fort Peck Lake enjoyed by thousands today.

My family's four year involvement with "the dam" project led me to write a book: Fifty Cents An Hour: The Builders and Boomtowns of the Fort Peck Dam.

Go, Mom! She's a better writer than I'll ever be, and her tenacity in completing this meticulously researched project blew my doors off.

Anonymous said…
Awesome news! It's nice to see someone so proud of their Mom - and you have good reason to be!
8:38 AM

Colleen Thompson said…
Congratulations, Ms. Lonnquist! Wishing you all the best with your debut.

I used to write American-set historical fiction, and I've spent a lot of happy hours poring through local/regional histories. I truly admire anyone with the time and perserverance to nail down and document the facts. It's an underappreciated but valuable endeavor.
9:19 AM

Teresa D'Amario said…
A great story. Most people forget their family history and it's importance to those that come after them, or even to the towns in which they lived.

I have an ancestor who built bridges. In a time where travel was limited by horse and buggy, my ancestor stepped up and built bridges across rivers, streams, and creeks.

It probably didn't seem like that exciting of a job at the time, but he was instrumental in creating what we now know as North Carolina. He also participated in the Byrd expedition, that surveyed the VA/NC border in the mid 1700's.

I'm betting he did both for the money, not for the "historical significance". Yet without him, where would North Carolina be today? Sure, someone would have stepped up to the plate, but I'm proud and honored that my own family participated in that early development.

Ok, waxing philosophical is not my normal forte before 1 pm, but hey, couldn't help myself.
10:13 AM