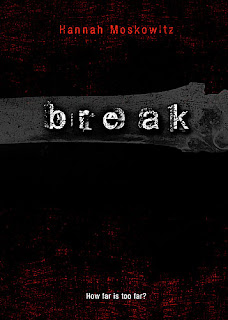 I came across Hannah Moskowitz's writing quite by accident, when looking up blogs about YA male characters. Tune in tomorrow, when I'll dish with Hannah about this and other subjects, but first I want to introduce you to her and her novel Break, which debuted last year.

Break is in the tradition of Laurie Halse Anderson--edgy but lyrical, intense but nuanced, fast-paced but psychologically ripe. In chapter one, we're introduced to protagonist Jonah, who breaks his wrist in the second sentence. Intentionally. Yes, that's right, Jonah's goal is to break as many bones as he can, and he has his friend Naomi to document it. As usual with a premise like this, the track of the novel is as much about the psychological interworkings and pathology of the central character as it is about the arc of the story, and Moskowitz handles this balance beautifully.

She takes what could have been a melodramatic or emotionally difficult story and carries us through the trauma with biting dark comedy. From Naomi, who would "probably shake hands on her deathbed," to Jonah's brother Jesse, who is allergic to everything, the characters come alive through Jonah's sarcastic and intelligent voice. Moskowitz is a careful observer of human nature, and gets so many things excruciatingly right. Jonah describes his parents as having "home-from-the-ER faces," even though his mother "stayed home and bounced the baby." The dialogue leaps off the page, and the parents, although a little thinner and less consistently drawn, have the ring of truth. The whole novel has that ring, and if you're not impressed enough already, just wait until Tuesday when you'll get to hear from Hannah, who, by the way, got the contract for Break when she was just sixteen.

What an amazing gift this young woman has. Get acquainted with her now, and watch her develop. I'm beginning to sense a superstar.